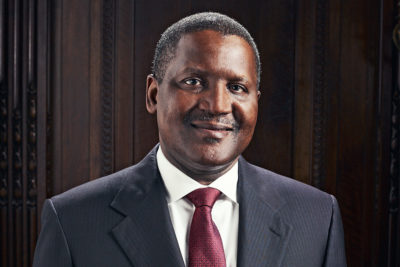 Aliko Dangote a Nigeria businessman, an investor and also the richest man in Africa was born on the 10th of April, 1957. He hails from Kano State. He was born into a wealthy Muslim family and started his own business in his early years. He said, “I can remember when I was in primary school, I would go and buy cartons of sweets and I would start selling them just to make money.” He is a man who did not sit on his parent’s wealth but built himself.

Aliko Dangote had his primary education at Sheikh Ali Kumasi Madrasa where he later moved to Capital High School, Kano. He had his bachelor’s degree in Al-Azhar University, Cairo where he studied business studies and administration in his bid to pursue his dream as a businessman.

At his young age, precisely when he was in primary school he would buy candy cartons and sell to his friends to make money. At the age of 21, he borrowed $3,000 from his grandfather and was importing and selling agricultural goods in Nigeria. He could pay back the borrowed money in no time because the business prospered. This resulted into him settling down in Lagos and started rice and sugar importation. He was able to convince his homeland, Nigeria which is the 7th most populous country in the world that he is capable of bringing something out of it.

He is the owner of Dangote Group, a group that has an interest in different commodities in Nigeria and other African countries. It was established in 1977 as a trading firm the same year he decided to settle down in Lagos. Today, it is a multi-trillion conglomerate which functions mostly in Nigeria, Ghana, Benin, Zambia and Togo.

Dangote Group has been the largest indigenous industrial conglomerate in Sub-Saharan Africa has its operational headquarters in Lagos, Nigeria. Since its inception, the group has experienced tremendous growth which can be attributed to Dangote’s commitment to his business and also on its consistency in delivering quality goods and services.

The Dangote Group is the major supplier of sugar in the market, the Country’s breweries, confectioneries and soft drink companies. It is the major exporter of cotton, cocoa, sesame seeds, cashew nuts and ginger to different countries. The Group is also into manufacturing and distribution of cement, sugar, pasta, tomato paste, fertilizer, packaging materials, milling and distribution of Flour, Semolina, refining of salt, crude oil, petrochemicals and Real estate. It also has major investments in textile, oil and gas, transport and banking.

Dangote group is working towards self-reliance in Nigeria and has drawn plans to set up world-class projects in a new dimension such as Agriculture, petroleum refinery and petrochemicals, fertilizer and telecom. Dangote group has almost taken Nigeria to a stage of self-sufficiency in cement and is expanding across Africa. Dangote cement produces 45.6million metric tons annually and operates in 10 countries in Africa.

He has his foundation called the Aliko Dangote Foundation (ADF), the main objective of the foundation is to reduce the number of lives that are being lost to malnutrition and disease. Putting an end to Severe Acute Malnutrition (SAM) in children through the use of their investments in education health and economic empowerment to help the poor.

In November 2011, he received the award of the Grand Commander of the Order of the Niger which is the second-highest honour in Nigeria. This award was given to Aliko Dangote by a former president of Nigeria, Goodluck Jonathan. In 2014, he donated N150 million to the prevention of the spread of the Ebola virus. Some of his other awards are Forbes Africa Person of the Year 2014, Clinton Global Citizen Award 2015 and also the number six (6) position in the list of “100 Most Influential Philanthropists 2018” which was created by Richtopia.

His marriage did not work as he has been divorced three times. He was first married at the age of twenty, he later fell in love with another woman but did not get married to her because she turned down his proposal. He later married Maria Muhammad Rufai but the marriage did not last, after his divorce with Maria he had a secret marriage with Sylvia Nduka but unfortunately, the union was not successful. Aliko Dangote has three beautiful daughters, namely, Halima, Mariya and Fatima who are doing fine in their respective places. He also has an adopted son, Abdulrahman Fasasi.

Aliko Dangote, Africa’s richest man with a net worth of US$10 billion as of January 2020 has claimed that he is buying Arsenal in 2021 after he finishes with his current projects.

He is not an example of rags-to-riches because of him being from a wealthy family but his interest in a business which he started from his early years must be applauded. Aliko Dangote is passionate about transforming Nigeria and Africa at large.

Cancer-Detecting Bra Innovated by a Nigerian