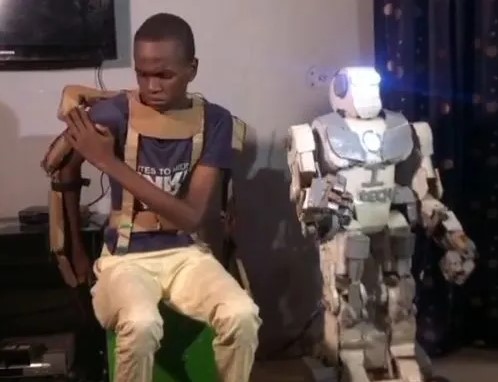 The passion for innovating a robot took Master Auwal-Barde two years to become a reality.
Master Auwal-Barde is a creative thinker just 17 years old. He graduated from Government Secondary School (GSS) with an outstanding result of 7 credits during his WAEC.

From DC motors, copper wires, pipes, corrugated cardboard, metal, and other materials Master Auwal-Barde created an Exoskeleton Robot that is powered with electricity.

He said, “It took me two years to invent the robot using local materials like DC motors, copper wires, pipes, corrugated cardboard as well as metal, among others, and the robot works with electricity. I want to be a robotics engineer so that I can be producing robots that can be used in addressing security challenges bedevilling the country,”

Auwal-Barde is most grateful to his father for his unflinching support of his passion.

Meanwhile, a delegate of the National Centre for Artificial Intelligence and Robotics (NCAIR), promised to secure a scholarship for him, to study computer engineering at any indigenous University.