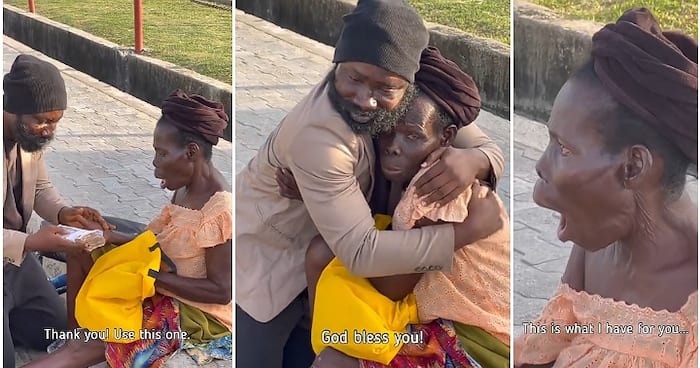 A young man approached an elderly beggar sitting by the roadside to beg for her assistance.
The young man begged her to give him some money for food and the woman gave him the N50 she had.

However, luck was on her side as the young man decided to reward her kind gesture by gifting her a huge sum of money

The woman got a huge reward for showing a great sense of humanity
In the viral video, the young rich man pretended to be poor and walked up to the woman to beg for some moi moi to eat

The elderly woman in her response told him that she only has N50 which was given to her by a kind passer-by.

However, the kind woman was ready to give the man the only money she had.

In response to her kind gesture, the young man told the woman that he is not really a beggar and then rewarded her with a huge cash way bigger than the money she offered to give him.

The elderly woman broke down in tears immediately as she never expected such a thing to happen in her lifetime.

Nigerian Clerics Reach Out During The Festive Period

Nigerian man Remembers Woman who Gave Him Free Food, Gifts Her a House