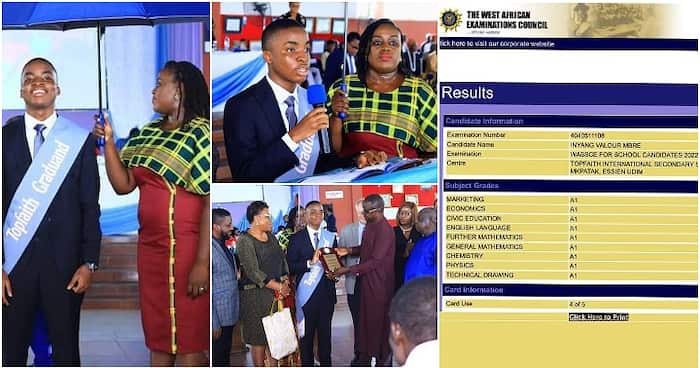 An Intelligent Akwa Ibom boy known as Valour Mbre Inyang did excellently well in the recent WAEC and Jamb exams, Valour Inyang had A’s in 9 subjects in the WAEC exams. He also scored an aggregate of 343 in four subjects in JAMB.

The commissioner for Information in Akwa Ibom State, Ini Ememobong shared the good news on Facebook and also posted pictures of his results.

He said:
“I celebrate this young Akwa Ibomite, Valour Inyang, who has confirmed to the world that excellence is our definition. I pray that our generation will build and bequeath to his generation a state that will support their dreams and aspirations.”

Valour was also the best graduating student in his set at the Topfaith schools.

Valour’s father, Mbre Inyang expressed his joy over his son’s performance and gave God all the glory

Valour’s father stated that he greatly admires his son because an outstanding trait about him is his extreme focus and determination to scale heights.

In his words:
“Thank you for getting in touch with me. I return all glory to God Almighty for what He has done for me and my family. I’m really excited about this remarkable exploit.”
“Since he started primary school, he has always been in the first position in his class. He was the best graduating student during the graduation ceremony in his primary school, sweeping all awards.”
“He represented Akwa Ibom state in the mathematics competitions for primary schools in Nigeria and won a scholarship. He has won several external academic awards. One outstanding thing about my boy is that he is so focused and determined.”

Young Man Gets Admitted into the Best University in London, Recalls How Parents Forced Him to Read Oil and Gas

Failed His Way to Success: Poor University Student in Nigeria Succeeded to Become a Professor, Launched Company Approved by The UK Endorsement Body