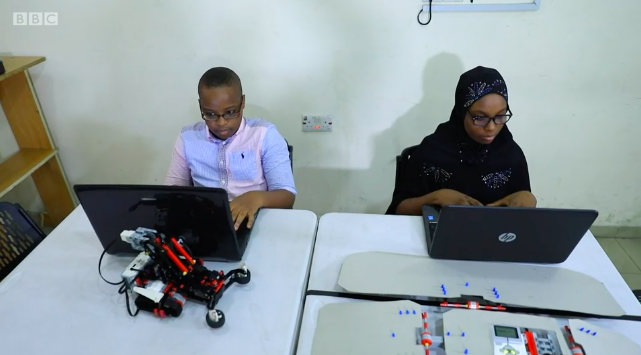 One 12-year old Fathia Abdullahi, very knowledgeable and skillful in coding has built a robot whose work is to fold clothes.

According to her, the robot is just a prototype. However, the pressure to make such invention was borne out of the burden which characterized how we spend time washing on weekends, Saturdays precisely and spend Sundays stuck still doing household chores. Sundays are supposed to be a day of rest, relaxation, spending time to take care of ourselves and preparing adequately for the week ahead. Unfortunately, we still engage in activities that uses up most of our time and energy out of which the most burdensome is laundry.

By virtue of the recent invention of this young Nigerian in her preteenage years, we can now bid goodbye to manual folding of clothes. In her words, ‘This is a T-shirt folder, I made it because there are too much clothes to fold on Saturdays and Sundays when we wash a lot. I made it using pins, some beams and an EV3 brick’. She told Reuters. EV3 brick is a programmable circuit that works as the heart of LEGOs, they are meant to be robots that kids can build and program themselves to carry out basic functions. LEGO is a robot kit with remote control for children for programming and learning how to code.

In addition, she said the robot is capable of folding any item of clothing once it’s laid out over the device in three seconds. She also said it’s in her plans to develop the device further and make available for sale at local markets to help make people’s chores easier.

According to BBC, Abdullahi became a coder by passion. Despite the success she’s recording in coding, she aspires to become a food scientist someday and relating both said she would love to use coding to build many things that would help her achieve her dream.

ANOTHER YOUNG NIGERIAN, ANOTHER ROBOT INVENTION

Abdullahi’s Friend, Oluwatobiloba Nsikakabasi Owolola, who is also 12 years old has programmed a robot grabber that senses nearby objects and moves them.

He started coding at age 10 and has longed to learn everything about coding. In his words, “This is a robot grabber, I programmed it to identify objects, grab it and take it to another position”. ‘I have found LEGO robotics interesting’. He added.

Just like young Abdullahi, He is also passionate about coding and he declared he wants to become a Robotic Engineer someday.

Earlier this year, CES made a laundry-folding machine, Foldimate. CES means Consumer Electronics Show, an annual trade show organized by the Consumer Technology Association (CTA). It is deficient compared to the new invention. It takes 5 seconds to fold clothes, doesn’t do extra small or large items like baby clothes and bed sheets respectively and costs up to $1000.

It is amazing how these young geniuses, in less than 2years of coding, came up with mind-blowing ideas and has already started using their skills to ease daily tasks for more efficiency.