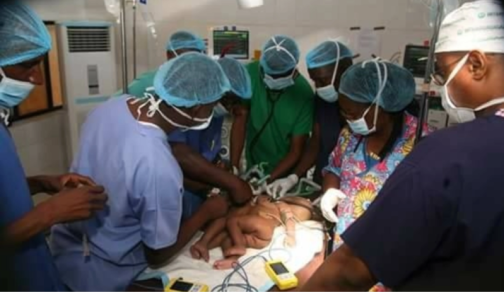 The possibility of the birth of conjoined twins is a very rear one. It occurs in 1 out of 49,000 births. The situation is a pathetic one as it can claim the life of either of the twins within 24 hours. An omphalopagus conjoined twin is a set of twins sharing part of the gastrointestinal system and abdominal wall.

On the 10th of July 2020, omphalopagus conjoined twins were operated on by a team of over 50 Nigerian Doctors. The operation which lasted for 9 hours was done at Federal Medical Centre, Keffi, Nasarawa state. It took specialist from various field of medicine such as paediatric surgeons, plastic surgeons, cardiothoracic surgeons, anaesthetists, intensivists, paediatricians/neonatologist, laboratory physicians, scientists, radiologists, nurses, pharmacists, social welfare officers, physiotherapists and orthopaedic Surgeons among others to carry out a successful surgery.
For the car of Hassana and Husseina Ukpo they were joined at the abdomen and rib cage, they shared a common liver, subcutaneous tissue and skin with fixed xiphisternum and cartilages of the 10th and 11th ribs.

The operation was successful as both children are alive and perfectly normal. The successful operation cost a whopping sum of 35 million Naira.
While expressing gratitude, the Medical Director of FMCK, Dr Yahaha Baba Adamu appreciated the State Governor for the donation of 10 million Naira for the operation. He also noted that this wasn’t the first time the Centre was presented with conjoined twins and recalled that the hospital had to refer the first one to the National Hospital, Abuja for separation.

With the brave success achieved in the separation of the conjoined twins, Dr Olorunnimbe Mamora who is the Minister of State for Health said, if necessary encouragement is gotten, the country will become a tourist attraction for medical practitioners.