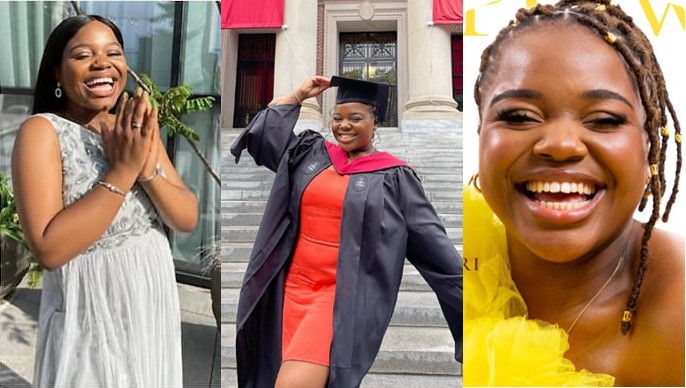 A young lady known as Vee K shared a story about how she was able to get into both Oxford and Harvard University despite her teacher discouraging her years ago saying she was not good enough for a university like Oxford.
However, she rejected the negative advice and has now gone on to bag two degrees, not only from Oxford but also from Harvard

She expressed her happiness after she graduated with two degrees, one from Oxford and the other from Harvard.

She said she wanted to school to Oxford University for her bachelor’s degree but she was told by her teacher that she was not good enough.

According to Vee, her teacher advised her not to bother applying since she was not good enough.

Sharing her story on LinkedIn, Vee said:
I graduated from Harvard. Five years ago my teacher told me I shouldn’t even bother applying to Oxford for my undergrad because I wasn’t ‘good enough.
“And fast forward ….. Last year I graduated with my undergraduate degree from Oxford University, and 4 days ago I graduated with my postgraduate degree in International Education Policy (officially) from Harvard University.
“This is just a little friendly reminder to teachers, guardians and people in general who play a role in children’s lives, just because it hasn’t been done, doesn’t mean it can’t be done. Let’s make sure our students know that.”