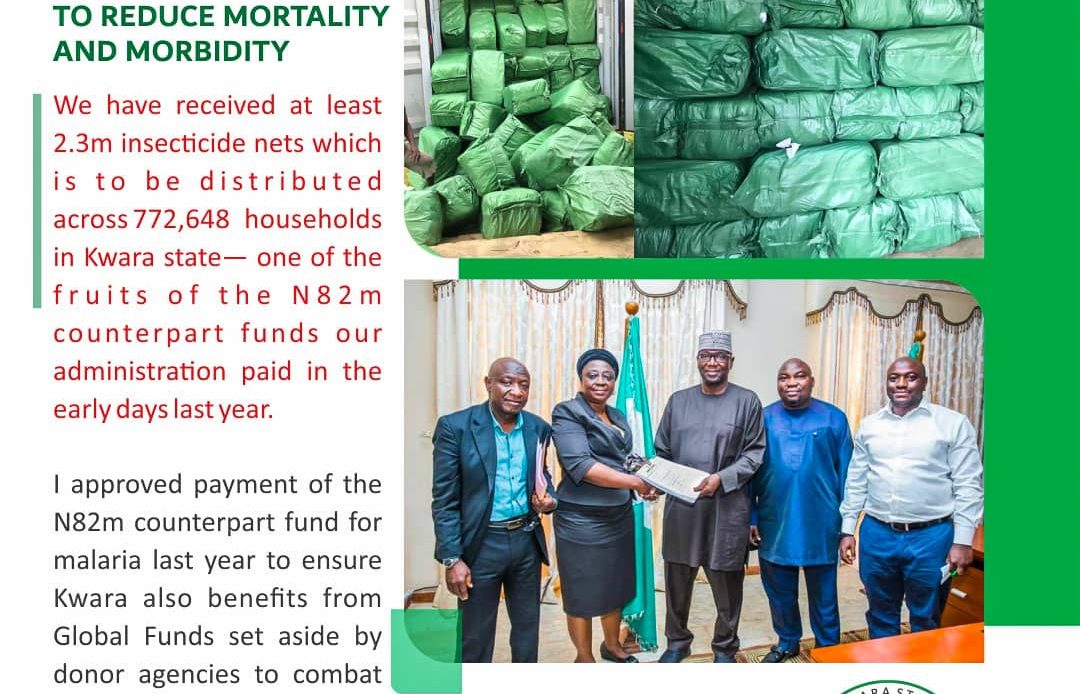 Kwara has received at least 2.3m insecticide nets to be distributed across 772,648 households in the state — one of the fruits of the N82m counterpart funds Governor AbdulRahman AbdulRazaq paid in the early days of his administration last year.

At $4 (N1,400) unit price, the treated nets are worth at least N3.3bn, aside the 5,000 ad-hoc staff to be engaged and paid to distribute the nets across the state, according to a statement on Sunday from the Kwara State Ministry of Health.

The statement quoted the State’s Director of Public Health Dr Oluwatosin Fakayode as telling reporters in Ilorin, the state capital, that the nets were supplied by the Global Fund and Partners to support AbdulRazaq’s anti-malaria campaign in the state.

“One of the strategic directions for the Ministry of Health under Governor AbdulRazaq is to reduce under-five mortality and maternal mortality drastically. This is being done to reduce significant causes of deaths, of which malaria is number one. The delivery of these long-lasting insecticide nets is to further complement the efforts of the administration to make the malaria elimination activities successful in the state,” Dr Fakayode said.

“Last year, the state government launched ‘Malaria Free Kwara Project’ which was preceded by generous approval and release of N82m as counterpart funds for anti-malaria activities in the state and this has started yielding fruits. One of the fruits is the delivery of 2.3m insecticide-treated nets by Global Fund and Partners. The delivery is for mass distribution across all wards in the state this year.

“The nets will be distributed to all Kwarans and we will use the strategy of one net to two persons, using the system called Cash and Assets Transfer Strategy. This strategy will be conducted by the ministry of health together with our partner, Society for Family Health and technology will also be deployed in the distribution process across the state. About 5000 ad hoc staff will be engaged for the distribution. I want to assure our people that wherever you may be, you will get the net to reduce the burden of malaria in the state and guarantee the survival of our pregnant women and children.

“As at today, malaria remains the number one cause of mortality and morbidity in children under five. When you visit our children emergency wards, three out of every ten beds is malaria. If you visit the out-patient department, about 60% of that consultation is due to malaria. Even in the private and public sectors, one of the reasons people do not come to work is malaria. So, malaria is our number one problem. It is our enemy. By the time we distribute the nets, it will be a cost-effective way of protecting lives against malaria. This is being done to scale up the Malaria Free Kwara Project of His Excellency the Governor.”

Fakayode said the distribution network has considered the outbreak of COVID-19, with adequate PPEs being offered to the team that would distribute the insecticide-treated nets across the state.

He added: “We do not want people to keep dying. We’re in a rainy season which is the peak of malaria season and if nothing is done, death from COVID-19 will also increase because when we have people with severe malaria who also have Covid-19, they are likely to die. Again, one of the areas that the Global Fund and malaria partners looked at was the possibility of distributing the net under Covid-19 with Personal Protective Equipment (PPEs) and we have assured them that the government will provide our partners and workers with PPEs. In fact, that accounts for the successful micro-plan we had that makes the delivery of nets to us possible. The strategy (of distribution) will also change. Instead of asking people to pick up the net somewhere, we are doing house-to-house distribution and each of our volunteers will be trained on infection prevention and control.”

Fakayode said the administration’s investment in the health sector and AbdulRazaq’s commitment to funding the sector have led to the categorisation of Kwara as a state with high political commitment.

“Before now we have had partners exited the state and even when you attend national events outside the state, others will just look at Kwara and ask us to go have our seat. Today, the narrative has changed. When we attend a meeting now, our partners are willing to hear from us and we are now classified as a state with high political commitment,” he said.

“That has endeared a lot of good things for us in the state. So, partners which had hitherto exited the state are coming back. Now, they have a lot of trust in the state. You will recall that one of the things His Excellency did when he came in last year was to prioritise health and he demonstrated this with the visits to the Federal Ministry of Health and heads of our partners to let them know the commitment. He also brought an action to what he was saying with the payment of counterpart funds.

“We have gone into all communities and settlements through our micro-plan to look at how many households will benefit from this intervention. So, 772,648 households have been identified and with our strategy, we have more nets to go round all Kwarans. We are working with ward development associations, community and religious leaders and other stakeholders to ensure that all households get the net. It will be a disservice to the good work of the state and generosity of our partners if at the end of the campaign we have missed settlements. So, we don’t want any settlement to be left out.”