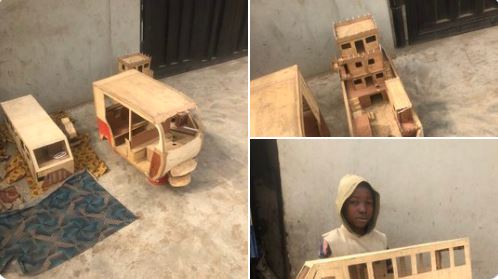 Some Nigerians called the skillfully designed piece of Joshua, “creativity at its best” while others were left without a name for the amazing handiwork of Joshua.

Though young, Joshua was able to pull a few pieces of wood together to design a replica of the bus, ships tricycles and other unique toys.

Joshua’s creativity became a topmost activity on tweeter after the publication of @omogawd. She uploaded photos of his works. She said she saw him on her way to Jumaat on Friday, February 19.

Underneath her post were some beautiful comments of Nigerians who suggested that Joshua should be encouraged rather than been forced to study law.