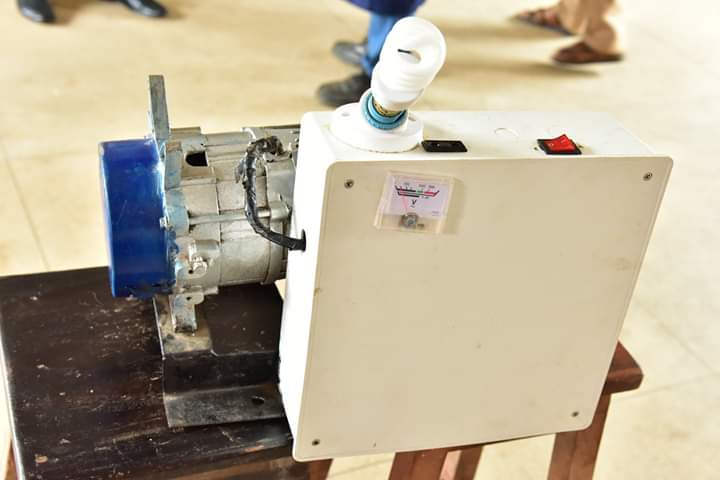 “Whatever the mind can conceive and believe, the mind can achieve.” – Napoleon Hill. This was the case of Augustine Igiebor, a 200L student of the Department of Mechanical Engineering, Federal University of Technology, Akure who developed a noiseless and fuelless generator. According to him, the idea was conceived in 2017 when he got admission into the university. He developed an interest in Engineering since his secondary school days and that resulted in him choosing his course of study.

For as long as we can remember, Nigeria has been going through power supply challenge and that has been a great disadvantage to every Nigerian of which Augustine is a part. This no doubt would have orchestrated his reason and without mincing words, this development has contributed immensely to the ongoing quest to find a lasting solution to this challenge.

With the assistance of three experienced academia and engineers in the School of Engineering and Engineering Technology of the University (Aremu Akintunde, Amos Osasona, and Anthony Afolayan) who deployed their technical expertise, the generator was produced with the following unique characteristics:

– It has a low noise level compared with other generators of the same capacity.

– It has no muffler

– It is cost-effective and light-weighted

The Dean of the School, Professor Aremu Akintunde, who expressed his happiness over the development and applauded the giant move said Augustine believed so much in the idea and raised most of the funds used to actualize the project.

The Vice-Chancellor, Professor Joseph Fuwape said the University Management will continue to encourage its students and staff who are creative and inventive and support their efforts to develop products that can solve real-life challenges in line with the technology for self-reliance mission of the University. He appealed to relevant agencies of government, industrialists and interested bodies especially key players in the power sector to partner with the University to fine-tune and commercialize the fuel less generator in order to tackle the country’s power challenges.

Augustine appreciated the Engineers and everyone who supported the idea. He said with proper support, the idea will go places and Nigerians will enjoy power.